10 Things You Didn’t Know About Ford

Ford is not only one of the largest carmakers in the world, but also part of what is known as the “Big Three” – Dodge/RAM, General Motors, and Ford. Since the beginning of the American auto industry, these three companies have remained the largest auto manufacturers in North America, but Ford was the first. 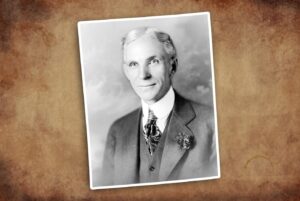 1. Ford Motor Company was founded in 1903 by Henry Ford in Dearborn, Michigan. This laid the foundation of the US auto industry in Michigan and remains the site of Ford’s headquarters to this day. Dearborn itself has become part of the Detroit Metropolitan Area, where all of the Big Three are located. As a result, Detroit carries the auto-related nicknames Motor City and Motown.

Can you imagine any modern factory without an assembly line? The assembly line itself was an invention by Henry Ford that has been in use since 1913. Copyright by AEC, 2022, with content from Ford Motor Company.

2. Ford in its early days prospered from the shrewd and practical approach of Henry Ford himself. He was not necessarily a big entrepreneur, but rather a talented inventor. He didn’t just come up with the brand’s first successful cars, but also engineered the idea of the moving assembly line as we know it today. Before the efficient assembly line, all cars were coach-built in large workshops. 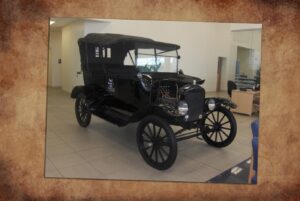 A 1917 Ford Model T in its ubiquitous black color. Although other colors were readily available, black was favored by Henry Ford because of its cheap price and quick drying properties. Copyright by AEC, 2022, with content by Franjklogos, CC BY-SA 4.0.

3. The 1908 Ford Model T was the world’s first automotive bestseller. It was as affordable as it was practical and sold over 15 million times until its discontinuation in 1927. It is said to have played a big role in the urbanization of the United States. Its affordability was in part due to the constant reduction of production costs during that time. This had its peak around WW1, when cost-cutting measures made the car only available in black. Henry Ford famously stated: “Any customer can have a car painted any color that he wants so long as it is black.” 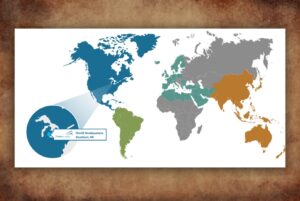 A map showing Ford‘s key markets around the globe. Copyright by AEC, 2022, with content from Ford Motor Company.

4. Although Ford is an American-based company, what you think of as “Ford” may vary depending on where you’re from. With major operations in North and South America, Europe, Africa, Asia, and Oceania, Ford is not only a global company, but also carries completely different vehicle lineups per market. Only a few models can be found worldwide, and many models are exclusively focused on specific regions. 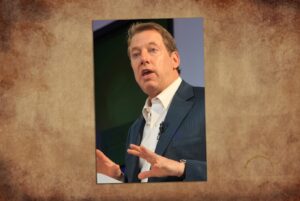 Bill Ford is Henry Ford’s great-grandson and part of the company’s management in the fourth generation. Copyright by AEC, 2022, with content from Ford Motor Company.

5. With William Clay “Bill” Ford Jr. as Executive Chairman, there is still a direct descendent of Henry Ford in the company management. He is Henry Ford’s great-grandson and the fourth generation of Fords active in the company. 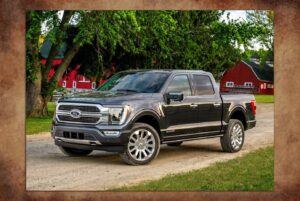 A 2022 Ford F-150 Limited. This is the fourteenth iteration of the world’s bestselling truck, the bestselling American vehicle, and the second bestselling car in the whole world. Copyright by AEC, with content from Ford Motor Company.

6. The Ford F-150, which has been marketed as the F-Series since 1948, is one of the world’s most-sold vehicles. With over 40 million units sold around the globe, it is second only to the Toyota Corolla. 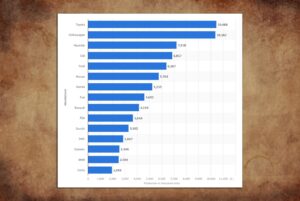 A graph showing vehicle production per year. Ford is in fifth place. Copyright by AEC, 2022, with content from Statista.

7. Despite its long-running best-sellers, Ford is only the second-largest US car manufacturer, and is fifth on the world market behind Toyota, Hyundai, Volkswagen, and GM.

Ford’s own parts and service businesses range under the FoMoCo and Motorcraft nameplates. Copyright by AEC, 2022, with content from Ford Motor Company and Alf van Beem, CC BY-SA 4.0.

8. Ford’s own parts supply organization is called FoMoCo – an abbreviation of the “Ford Motor Company” name. To sound more diverse and appealing, maintenance items and services are marketed under the Ford Motocraft moniker. 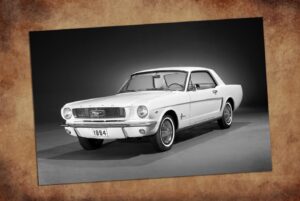 A very early Ford Mustang. Old Ford press photos always have the current model year as a license plate, telling us that this photo was taken between March and July of 1964.

9. The world-renowned Ford Mustang was launched in March 1964, just four months after the plant vacations and the traditional change of the model year. Therefore, almost all “first-year” Mustangs were sold as 1965 cars. Their fans, however, have always been a bit more precise and call these examples the ’64 ½.

An early 1990s Ford Mondeo – an unpretentious family sedan built to cater to as many world markets as possible.

10. In 1992, Ford launched the Mondeo as the first “world car.” The Mondeo was exclusively developed to cater to as many global markets as possible without needing any major design changes or technical conversions, hence its somewhat bland appearance. This is also reflected in the name “Mondeo,” which is based on the Latin word “mundus,” meaning world. In April 2022, the mid-size model was discontinued, rendering the compact Focus and subcompact Fiesta the only regular, non-SUV passenger cars in Ford’s lineup.

Learn more about the “Big Three” with our in-depth look at Dodge and RAM.